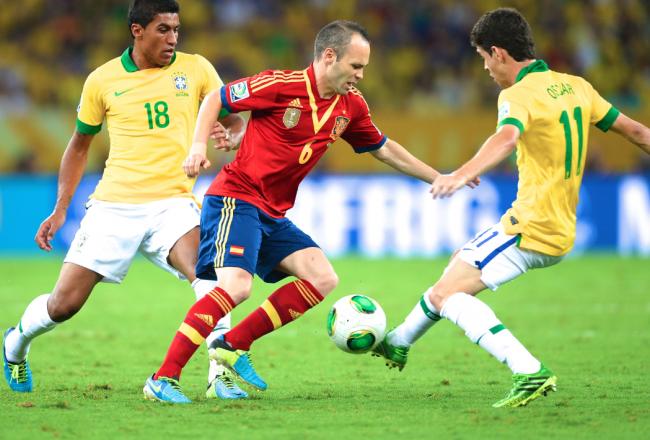 Those who didn't catch the final of the 2013 Confederations Cup will have been shocked when checking the score the following morning.
Spain—the unstoppable, tiki-taka footballing machine—weren't just beaten. They were slaughtered.
Luiz Felipe Scolari's Brazil continued the fantastic work Italy started in the semifinal, scoring inside two minutes and going on to win comfortably 3-0—a scoreline that was generous to la Roja in the end.
Let's take an all-encompassing look at how the Selecao stopped Vicente Del Bosque's men.
Formations 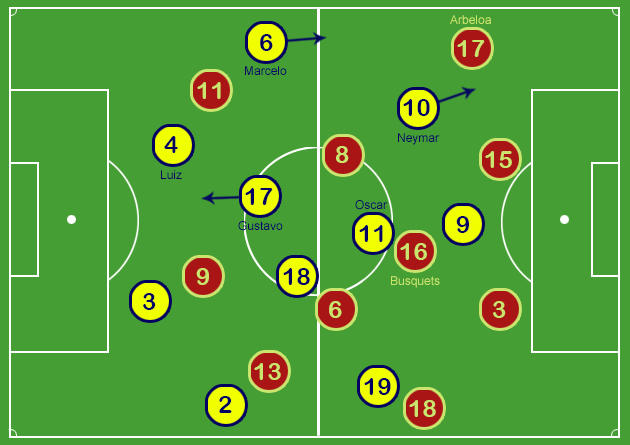 Brazil took their usual 4-2-3-1 formation with Paulinho and Luiz Gustavo as a holding midfield pivot. Oscar lined up in the No. 10 role, while Neymar was deployed on the left.
Spain fielded Fernando Torres as a No. 9 and continued with just the single holding midfielder they've utilised throughout the tournament.
Brazil Pressing
Right from the off, Scolari's men hounded and pressed.
Neymar lost the ball inside 30 seconds but his teammates won it straight back. From there, they moved forward at pace and with intensity, shifting the ball between the lines quickly and taking the lead inside two minutes.
The Selecao defended from the front all game long, exerting immense pressure in the final third and halting the buildup play as early as possible.
All four forwards were disciplined enough to do their part, while Gustavo and Paulinho put in a few superb tackles in the deeper areas.
Oscar on Sergio Busquets
A big part of Brazil's pressing game centred on a theory Bayern Munich used to conquer Juventus.
Oscar spent much of his first half following Sergio Busquets around in the deeper areas of midfield, rarely straying more than five yards away.
When Busquets did receive the ball, Oscar would pounce, creating turnovers in ridiculously dangerous positions and starting attacks close to goal. He totaled three tackles and two interceptions, according to WhoScored. 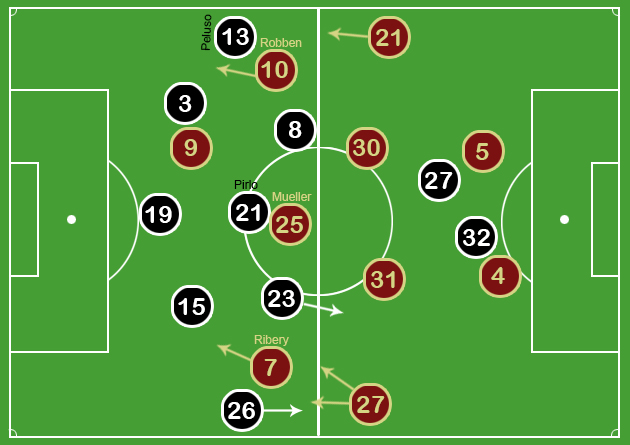 Heynckes cancels Pirlo
This is a system Jupp Heynckes also used to nullify Barca, sticking Mario Gomez—and later Thomas Mueller—on duty to stick to Busquets to remove him as an option to pass to and stifling his darting movements forward.
Many would focus on Andres Iniesta or Juan Mata, but this makes two coaches who have gone directly to the source in an attempt to starve the playmakers of the ball.
The David Luiz Shift
Spain's pressing game has been lacking in the latter stages of the tournament.
Against Uruguay, they were like midges to a lamp, but the heat and humidity has taken its toll and left la Roja's all-energy style severely lacking.
Rather than press Italy in the semifinal, they simply backed away, put 11 men behind the ball and waited for Italy to try to instigate things.
The final was no different, and the entire midfield struggled to cover the ground they usually do. They lost the ball earlier and more frequently than usual, too, giving them limited chances to rest in possession and recover stamina.
The strikers attempted to instigate pressing from the front, but much how Bayern found a way around this by using Manuel Neuer to dominate the numbers, Brazil tried something interesting too. 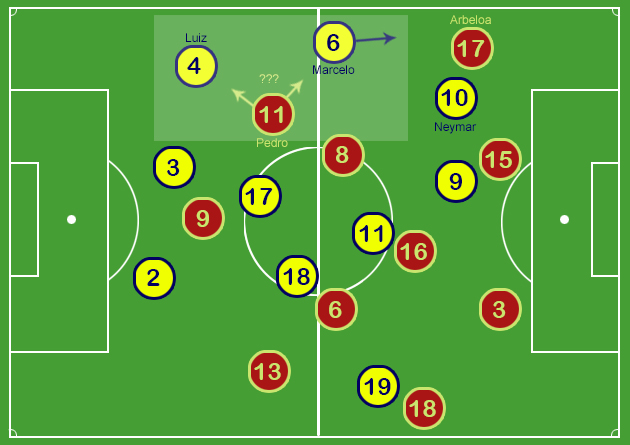 The back line switched to a back three temporarily, with David Luiz on the ball shifting into the left-back position. He'd fire it up the line to Marcelo, who was now in a wide midfield position, who in turn would distribute it up the field.
Pedro, the right winger, wasn't sure who to press. If he followed Marcelo, Luiz could hit a long ball (the first goal was created by Luiz's raking pass to Hulk). If he pressed Luiz, Marcelo would be unattended.
They worked it several times down the left side and Neymar saw plenty of the ball while circumventing the pressing game.
Physical Brazil
Coming into the game, concerns were signaled over the competency levels of Brazil's holding midfield duo.
They struggled to create all tournament long from a central position, and the Selecao's game had relied upon longer balls or working it down the sidelines.
Gustavo and Paulinho are no passmasters, and given Spain's high intensity pressing, would they collapse?
Not even a little. 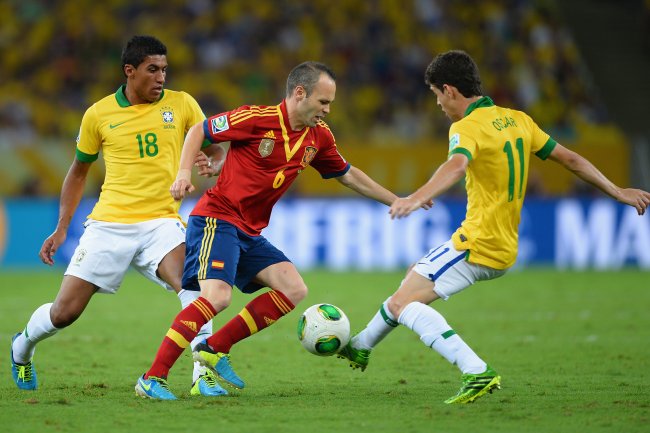 Laurence Griffiths/Getty Images
The pressing game was sub-par, granted, but the two holding midfielders simply shrugged la Roja's challenges off if they came too close. They are both big, physical players who are capable of holding their own. Little Xavi, Iniesta and Pedro came nowhere close to troubling them.
Again, we look at Bayern's victory over tiki-taka football: Physically imposing yet technically excellent midfielders, in conjunction with a high defensive line, can overcome technical, smaller players with a limited space to work in.
Alvaro Arbeloa
At the risk of sounding like an acceptance speech, this resounding Brazil victory could not have been possible without Alvaro Arbeloa.
Truly a tournament to forget for the Spaniard, fans will not be eager to see him don la Roja's famous shirt again any time soon.
A liability in possession and positionally very suspect, the Real Madrid right-back was withdrawn at halftime in favour of Cesar Azpilicueta. The Chelsea man then immediately drew heat for letting Fred score the third down his side, but really he was flummoxed by incredible movement from Neymar.
Spain's Fragility With 1 Defensive Midfielder
Throughout the group stage, la Roja looked fluid and purposeful—a revamped side in comparison to the one that stumbled over the line at Euro 2012.
But that came at a cost, and that cost was defensive fragility: Del Bosque has switched tactics, using just one holding midfielder in light of Xabi Alonso's injury before the tournament. 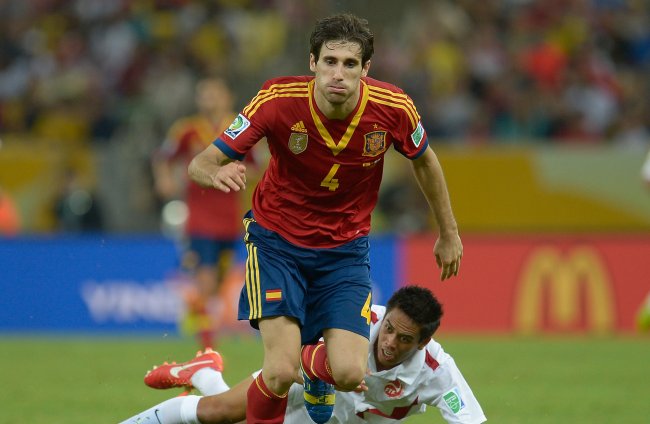 Alexandre Loureiro/Getty Images
Should Martinez have featured more prominently?
The usual solid pivot is gone, leaving Busquets to fend away a multitude of attackers on his own. He's been swamped by markers and midfield runners, and the lack of a pressing game has only worsened this.
He has had little time to recover, had few passing options and was up against experienced shackling from Oscar. Spain might have been delightful going forward in the early stages, but boy were they wide open at the back.
Conclusions
Spain did not play well in the final two games, but as much as heat and humidity played a part, Cesare Prandelli and Luiz Felipe Scolari did too.
Prandelli's three-man defensive line and focus on attacking Jordi Alba nearly w..., and Scolari finished the job by avoiding pressing, marking Busquets and shrugging off challenges with a bigger, stronger side.
The two games will be recorded and studied by any tactician worth the title, and Spain are now officially under the microscope.
What must Del Bosque do to freshen things up? Can Spain rely on Xavi and Iniesta next year in Brazil, or are the likes of Isco and Thiago Alcantara required?
Scolari will be delighted, and needs to build on this performance ahead of the World Cup. He's proven his worth, but more critically he's proven la Roja are beatable.
source