The migrant slave trade is booming in Libya.

Why is the world ignoring it?

I’ve seen the dangerous route to Europe through Libya, with thousands of people at the mercy of cruelty for profit. But our leaders prefer to keep them there 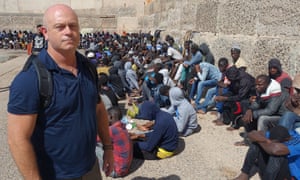 ‘We have a heightened responsibility towards Libya because of the role Britain played in bringing down the Gaddafi dictatorship.’ Photograph: Dave Williams/Sound Ltd

It’s a mass grave that we don’t need the United Nations to verify. Every day an average of 14 migrants, the vast majority from countries in sub-Saharan Africa, die crossing the Mediterranean.

Many more see their European dream turn into a nightmare long before they’re corralled on to flimsy rubber dinghies on Libya’s beaches. They’re the victims of a silent massacre in the Sahara desert – a journey more deadly than the crossing from the coast, according to the International Organisation for Migration.

Come the spring, thousands of migrants and refugees fleeing poverty and violence will die in Libya, but I doubt you’ll hear much about it. Compassion fatigue has set in. The numbers have become too big to comprehend. It’s an old story; we feel numbed by the now familiar news images of men huddled together on boats. Maybe it’s because they’re African and have been written off as “undeserving economic migrants”. These are the people some of our political leaders have in mind when they talk of swarms, plagues and marauders. The understandable focus on Syrian refugees has taken the spotlight away from the more dangerous route to Europe through Libya.

‘What I saw there is nothing short of a modern-day slave trade.’ Photograph: Dave Williams/Sound Ltd


Or maybe it’s because, with three rival governments presiding over anarchy in Libya, and the real power lying in the hands of armed militias, getting inside the country to tell the story is just too difficult and dangerous. One thing is becoming clear – many people have come to see this tragic situation as though it were more a problem for us than for the migrants. We have stopped caring about them. As a documentary-maker, I believe it’s our job to make people care. That was the reason my team and I went to Libya – to try to shine a light on the under-reported plight of migrants away from the coastline and to tell the human stories of the men and women making the journey.

What I saw there is nothing short of a modern-day slave trade, with migrants treated as commodities. It’s as though nothing has changed in the 300 years since desert tribes used the very same routes to bring slaves to north Africa: Nigerian women told they are going to Italy to work as housemaids only to be trafficked into desert brothels with no idea when they might leave, young men cruelly beaten and held captive for months until their families pay a ransom, women forced to take contraception to stop themselves becoming pregnant at the hands of smugglers.

What makes their plight even sadder is that most have no idea what sort of country they’re entering. I saw this when I spoke with men and women at the very start of their journey – dazed and battered from the drive across the desert border with Niger but filled with a naive optimism. 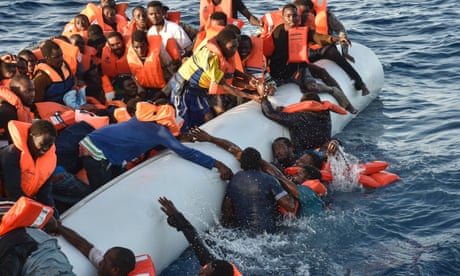 Not only are they at the mercy of people smugglers but also the authorities themselves – in the main, armed militias with no one to hold them to account and few other sources of income apart from the migrant trade. In the desert town of Brak, I met a young man who told me he had no choice but to work for a smuggling ring ferrying migrants to a handover point on the back of a pickup.

While Libyans may rely on their own militias for protection, the migrants have nothing and no one to protect them. When they are intercepted by what authorities do exist in the country, they are taken to squalid, overcrowded warehouses – generously referred to as detention centres. In one centre for women in the coastal town of Surman I met Aisha, a young Nigerian. She was bleeding to death after giving birth to her baby girl on the toilet floor. The child died three days later. Since coming home we have tried but been unable to find out what has happened to Aisha. I fear the worst.

Even in the worst refugee camps in the world there is often food, medical facilities and aid workers to offer support. In the Libyan detention centres, migrants are locked up and left to rot. It’s a humanitarian disaster with barely any humanitarian organisations there to help. For tens of thousands of migrants in the country at the moment, they have no means of escape. Libya doesn’t want them, Europe doesn’t want them and even their own countries don’t want them.

We have a heightened responsibility towards Libya because of the role Britain played in bringing down Muammar Gaddafi’s dictatorship with no strategy for what was to come next. In the five and a half years since his death, lawlessness and anarchy have created the perfect conditions for people smuggling to thrive.

Last month, EU leaders under pressure to stop the tide of migrants travelling to Europe signed a deal with Libya. Far from helping people escape, this deal is aimed at keeping them there. It’s only one step away from forcibly returning them. Whatever your view on the migrants’ rights, forcing them back into the conditions we know they will experience in Libya is far from a humane solution. Conditions for migrants in the country need to drastically improve and until there is evidence of this, can we really consider the current deal an acceptable solution to such a horrific situation?

• This article was co-authored by producer Jamie Welham. Ross Kemp: Libya’s Migrant Hell airs on Sky 1 on 21 February at 9pm

Nigerians For Sale In Libya: Where Lives Are Auctioned For $400.

"Eight hundred," says the auctioneer. "900 ... 1,000 ... 1,100 ..." Sold. For 1,200 Libyan dinars -- the equivalent of $800.
Not a used car, a piece of land, or an item of furniture. Not "merchandise" at all, but two human beings.
One of the unidentified men being sold in the grainy cell phone video obtained by CNN is Nigerian. He appears to be in his twenties and is wearing a pale shirt and sweatpants.
He has been offered up for sale as one of a group of "big strong boys for farm work," according to the auctioneer, who remains off camera. Only his hand -- resting proprietorially on the man's shoulder -- is visible in the brief clip.
After seeing footage of this slave auction, CNN worked to verify its authenticity and traveled to Libya to investigate further.
Carrying concealed cameras into a property outside the capital of Tripoli last month, we witness a dozen people go "under the hammer" in the space of six or seven minutes.
"Does anybody need a digger? This is a digger, a big strong man, he'll dig," the salesman, dressed in camouflage gear, says. "What am I bid, what am I bid?"
Buyers raise their hands as the price rises, "500, 550, 600, 650 ..." Within minutes it is all over and the men, utterly resigned to their fate, are being handed over to their new "masters."
After the auction, we met two of the men who had been sold. They were so traumatized by what they'd been through that they could not speak, and so scared that they were suspicious of everyone they met.
Deportation 'back to square one'
Anes Alazabi is a supervisor at a detention center in Tripoli for migrants that are due to be deported. He says he's heard "a lot of stories" about the abuse carried out by smugglers.
"I'm suffering for them. What I have seen here daily, believe me, it makes me feel pain for them," he says. "Every day I can hear a new story from people. You have to listen to all of them. It's their right to deliver their voices."
One of the detained migrants, a young man named Victory, says he was sold at a slave auction. Tired of the rampant corruption in Nigeria's Edo state, the 21-year-old fled home and spent a year and four months -- and his life savings -- trying to reach Europe.
He made it as far as Libya, where he says he and other would-be migrants were held in grim living conditions, deprived of food, abused and mistreated by their captors.
"If you look at most of the people here, if you check your bodies, you see the marks. They are beaten, mutilated."
When his funds ran out, Victory was sold as a day laborer by his smugglers, who told him that the profit made from the transactions would serve to reduce his debt. But after weeks of being forced to work, Victory was told the money he'd been bought for wasn't enough. He was returned to his smugglers, only to be re-sold several more times.
The smugglers also demanded ransom payments from Victory's family before eventually releasing him.
"I spent a million-plus [Nigerian naira, or $2,780]," he tells CNN from the detention center, where he is waiting to be sent back to Nigeria. "My mother even went to a couple villages, borrowing money from different couriers to save my life."
As the route through north Africa becomes increasingly fraught, many migrants have relinquished their dreams of ever reaching European shores. This year, more than 8,800 individuals have opted to voluntarily return home on repatriation flights organized by the IOM.
While many of his friends from Nigeria have made it to Europe, Victory is resigned to returning home empty-handed.
"I could not make it, but I thank God for the life of those that make it," he says.
"I'm not happy," he adds. "I go back and start back from square one. It's very painful. Very painful."